The most recent Singles’ Day has seen record-breaking figures reported by Alibaba of over $25.3 billion, a 40 per cent increase in sales from the previous Singles’ Day.

This relatively new phenomenon heralded as “11.11 Global Shopping Festival” began in China, falls on 11th November (read more about Singles’ Day here) and has become a staple for e-commerce.

Commercially speaking, Singles’ Day far outstrips the amount spent by consumers on Black Friday or Cyber Monday. In fact, China’s e-commerce market was two and a half times bigger than the US in 2016.

The continuing fight against e-commerce counterfeiters

Chinese e-commerce giants, Alibaba and JD.com, are seizing this opportunity to further establish themselves as leaders in the world’s luxury goods market. As part of Alibaba Group’s Tmall “See Now, Buy Now” fashion event, both on-site attendees and TV viewers placed orders through the company’s apps. This year, mobile apps contributed a staggering 90 per cent of the sales, up from 82 per cent in 2016 and 69 per cent in 2015 on Alibaba. 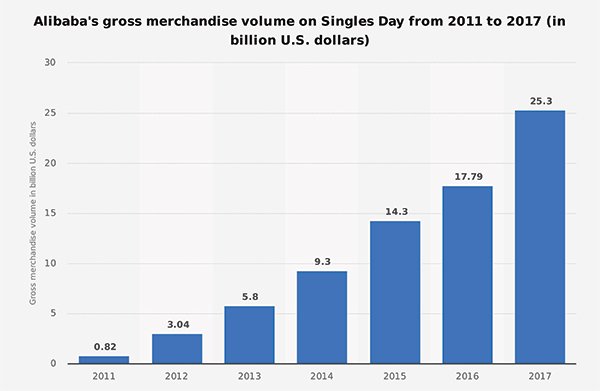 Unfortunately, where there is greater e-commerce then there will be more counterfeiters selling fake goods. According to a report jointly compiled by the Chinese National Development and Reform Commission and Alibaba, offering a comprehensive credit evaluation of the 2016 Single’s Day shopping event, it is noted that counterfeit merchandise took up a large proportion of overall reported dishonesty cases. It states that some merchandisers took the opportunity to sell poor quality, refurbished or replica goods in high volume.

The Alibaba-backed aggressive push into South East Asia, means that counterfeits will travel further and wider as the message of cheap deals profligates on smaller B2C marketplaces. Lazada, South East Asia’s biggest marketplace saw a whopping 191 per cent increase in items ordered on the marketplace from last year, which equates to 65 million items bought.

Tech-savvy counterfeiters continue to flourish in countries that provide the technological infrastructure to sustain an e-commerce business while little or no legal structure is available to protect IP rights. Zheng Junfang, chief platform administrator of Alibaba, disclosed data showing that in 2016, Alibaba’s platform governance department detected 4,995 sellers offering fake goods to a value far greater than the minimum threshold required to prosecute counterfeiting crimes ($75,517). However, only 33 cases have been confirmed to have received criminal judgement, making up less than one per cent of the cases reported.

Earlier this April, JD Worldwide, a cross-border B2C platform affiliated to JD.com, was reported to be plagued with counterfeits; so much so that all Coach bag merchandise sold by the top 10 sellers were counterfeits. JD Worldwide rapidly delisted over 90 per cent of counterfeit products when the police launched a crackdown, as well as amending the rules for merchants to enter the marketplace by requiring them to provide brand authorisation licenses.

Raising the barriers to entry

These licenses and quality-checked reports can all be easily faked, whilst Chinese marketplaces have no way of verifying the authenticity of these documents with the brands themselves. Marketplaces such as Tmall, JD, Amazon China and Kaola have attempted to minimise counterfeiting by introducing a deposit ranging from $2,000 to $25,000 from sellers, which will be charged to the account if counterfeiting activity is discovered. The real impact of these disincentives remains dubious, as a successful counterfeit seller can easily and quickly earn back a lost deposit.

What can brands do?

Given the increasing popularity of Singles’ Day, we are likely to continue to face a considerable increase of counterfeit activity around this time of the year. There are challenges in enforcing on these key platforms and the lack of regulation over platform operators has hindered luxury e-commerce development by brands themselves. Although the problem can never be completely eradicated, brands are advised to make concerted and ongoing efforts in working with platforms to help them understand their concerns, reduce visibility of the product to consumers and decrease the volume of infringing product that is offered for sale. Success ultimately lies in this collaborative effort and the platforms’ willingness and ability to act to protect trademark owners.

Learn what is being done to combat counterfeiting on Chinese ecommerce platforms for Singles' Day.

Counterfeiters in the starting blocks as Singles’ Day approaches

The demo is personalized for you. Get answers to your questions and find out why Incopro is the right choice for you.