We investigate how an illegal large-scale network selling fake football jerseys was able to operate unhindered during the football World Cup and how it could have been stopped.

Replica shirts are a popular target for counterfeiters, and this only increases during the hysteria of a World Cup. Our analysts revisit a large counterfeiting network that spans social media accounts, marketplaces, and websites first identified at a previous event and detail how it has evolved through the years. The network was selling replicas shirts and it is interesting to see how new behaviors and methods materialized throughout its lifespan. It appears that these infringements were being monitored and enforced by someone, though without the benefit of the advanced network-level intelligence that Incopro can provide.

How does the network operate?

Large-scale counterfeit networks evolve very rapidly to counteract enforcement efforts. We can see that this network has evolved significantly in response to attempts to take it down since we started tracking it a few years ago. Utilizing a combination of social media and websites to sell their illegal merchandise, we see that when channels they use are closed down, they are quickly replaced and the counterfeiting activity continues.

Bad actors use websites as e-commerce platforms to complete transactions, funneling customers to these locations via their social media profiles and posts. In relation to this network, we identified six Facebook accounts and thirty-three websites, although very few of them were the same as had been operating previously. Throughout the tournament, our analysts noticed that if a website was closed, the social media platforms simply switched their promotion efforts to another within the network and the infringement continued unhindered. An example of a previous network discovered by Incopro is illustrated below. 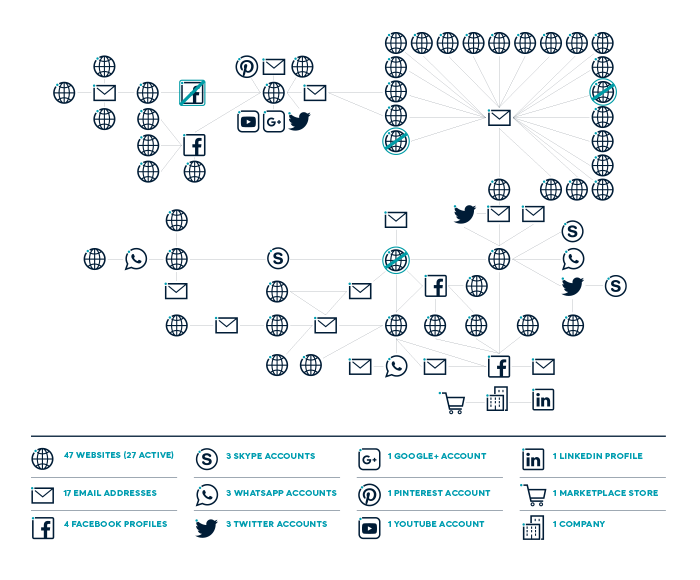 This shows the importance of eradicating an entire network at once; if one or two accounts are closed then you are causing a minor inconvenience to a counterfeiter, not having a real impact by shutting down their operation. This is the critical limitation of fighting counterfeiters without an intelligence-led strategy. You only shut down individual accounts ad-hoc and are unable to keep track of the full scale of the issue.

How to fight large-scale networks

Taking an intelligence-led approach to fighting large-scale counterfeiting networks is the only truly effective way to shut down these operations. Incopro uses advanced Network Analysis technology to achieve this; we connect all elements within the network across over 20 data points such as social media accounts, websites, and marketplace listings to build a complete picture of the counterfeiting operation. This enables enforcement at scale rather than playing ‘whack-a-mole’, addressing the source of the issue to bring long-lasting results for brands.

There were clear signs that someone was trying to fight this network during the tournament, but with an ad-hoc approach they made very little progress and as highlighted in our guide on effectively fighting large-scale networks, did not feel threatened enough to even change the contact details they were using across the network. Incopro constantly monitors networks such as this so we can continue to understand the behavior of counterfeiters and identify any new trends, ensuring we stay ahead of the curve and deliver real impact that to defend our customers’ IP online.

For one of our clients, Talisman detected a hidden network containing over 530 social media accounts, 14,140 infringing URLs, and over 7,000 marketplace listings, and successfully enforced against the entire operation within 24 hours. 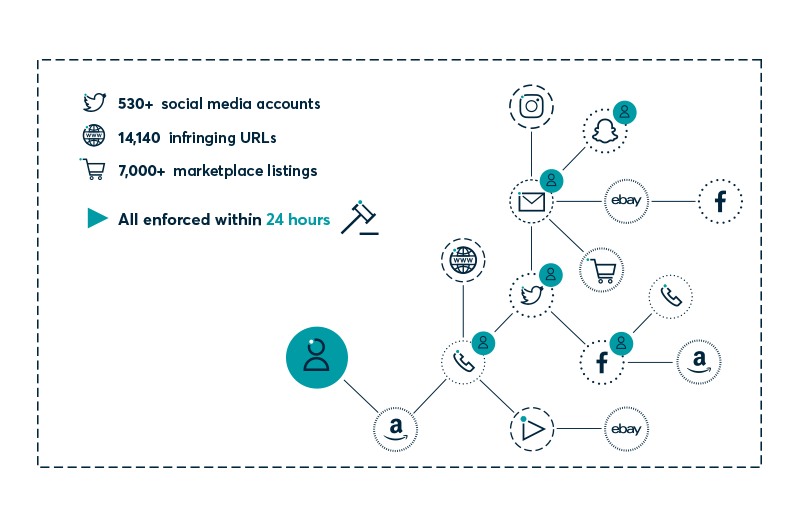 Request your personalized demo to learn more about how our Network Analysis technology and how we can protect your brand and consumers from bad actors.

Who’s the most in-demand player at the football World Cup?

The advantage of multilingual team helps you defend businesses from infringers with effective brand protection.

The demo is personalized for you. Get answers to your questions and find out why Incopro is the right choice for you.